I got an okay place to stay last night and got to bed early. Next day I didn’t have too far to ride to my next destination, just a little further south on the Panamericana.

I thought chinchas were bedbugs?

I now entered the Pisco region, famed for it’s “pisco” wine, here for sale at a gas station.

Ah. Pisco, the town.
They suffered an earthquake a couple of years ago.

Lonely Planet says that you have to stay in Pisco to take the tour of the Islas ballestas from Paracas…in my own mind if you have to go to Paracas for the tour, why not jut stay there. Pisco looked ike such a disaster I decided to try.

I got a hotel almost on the beach with a really nice patio overlooking the  bay for 45 soles, about  $15/night.

I booked a Islas Balllestas tour for hte next day, and  since it was still early in the day I decided to ride out and see the Reserva Nacional de Paracas ( https://www.paracas.com/turismo/atractivos-turisticos/reserva-nacional-paracas/ ), where there is all sort sorts of cool avian life.

I paid my entrance fee, and was directed to the museum as a good place to start my tour. Hmf. There was not a soul there, so I could not even ask where th est places to view the wildlife were. Hmf.

I decided to ride out to the sale mines–I was told there was a flock of flamingos living there.

I did not see any.

Tis was the coolest thing I saw out there…I actually considered seeing if  I could get it to run, but I did not want anyone to think I was stealing their motorcycle…was it a relic or was  it someone’s actual ride? Not a  soul in sight to tell me.

Next stop, the Cathedral.

Here’s what it used to look like, before the earthquake that sent it crumbling into the ocean… 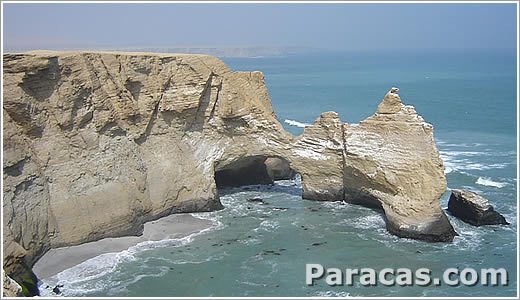 So I enjoyed the view,  still wondering where all this great wildlife was.

I Started out this sand track to see where it went, but I was feeling worse and worse, and I was disappointed not to see any of the cool birds Lonely Planet Guide promised.

I headed back to the hotel, and when I pulled up…

I dropped the bike for the first time on the trip.

ARGH! 16,000 miles, and my first tip over. ARGH! I was feeling so badly at this point, though, that I just stood there looking at it on its side…finally two men came over and offered e help getting it up. ARGH!

I emptied my guts and took a nap.

That evening I walked around “downtown”  Paracas a bit. I kipped dinner.

I came across this guy feeding the Pelicans. I took some pics, made some nice conversation, and afterwards he asked me for a tip. Typical.